What and Where is the Pee Dee?

What does the Pee Dee mean to you? Whether you are a native, a visitor, or a transplant to the Pee Dee Region, we want to hear your thoughts and impressions. Collectively, they make us who we are.

The Pee Dee is not just a river; it is not just the name of an Indian tribe; it is a place.

The Pee Dee is a region with subtle but rich geographic variations: deep woodlands that intrigue botanists and birders; a patchwork of forests and fields that entice outdoors-men and -women for hunting; and black-water swamps and creeks that intermingle with red rivers and high bluffs. Travelers are fascinated by the crossroads communities and the tree-lined roads, and they trace their ancestry back to the region – counting their kin among Revolutionary War soldiers who fought with General Francis Marion, as well as the leaders and laborers who have driven the economy of the region and state.

It has continued to be one of the most productive agricultural areas in the state, even as farming practices have evolved over time. The long-time farm operations have kept intact some of the most notable areas of the Pee Dee. Rural populations and the layout of farm upon farm depend on the compatibility of surrounding land uses in order to continue traditional lifestyles, to protect the clean air, to reduce pressure on the water bodies, to alleviate the congestion on roads, to provide employment, and to sustain the distinctiveness of the region. And as the nation shows greater interest in local produce and domestic energy sources, we will all seek out the places with a long growing season, fertile soils, sufficient water, and land use patterns suitable for agriculture. The Pee Dee Region is well-positioned to provide for those needs.

A great resource on this subject is A River in Time by Suzanne Linder, available from the Pee Dee Land Trust online store. 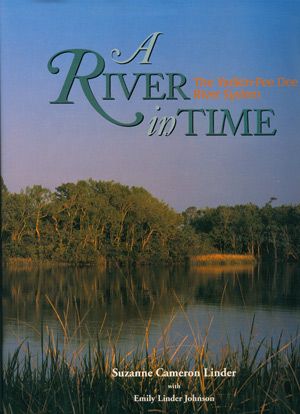 A Snapshot of Land Use Across the Pee Dee

What is more common in the Pee Dee – farmland or woodland? Woodland, by a factor of two to one. Which counties are mostly wooded? Chesterfield has the highest percentage and the greatest total acreage of woodland. Which counties are mostly agricultural? Darlington has the highest percentage of agricultural land, and Florence has the greatest total acreage. What is the most common type of forest? Bottomland hardwoods, by far. Where is development expanding the most? Myrtle Beach and Florence.

The answers to these questions help to guide the conservation work of PDLT and our colleagues -- and now we have a comprehensive Land Use/Land Cover map providing a current snapshot of land use across the nine counties we serve. With the right information about land use, we can gain the knowledge to understand the highest priorities for conservation that will benefit current and future generations. 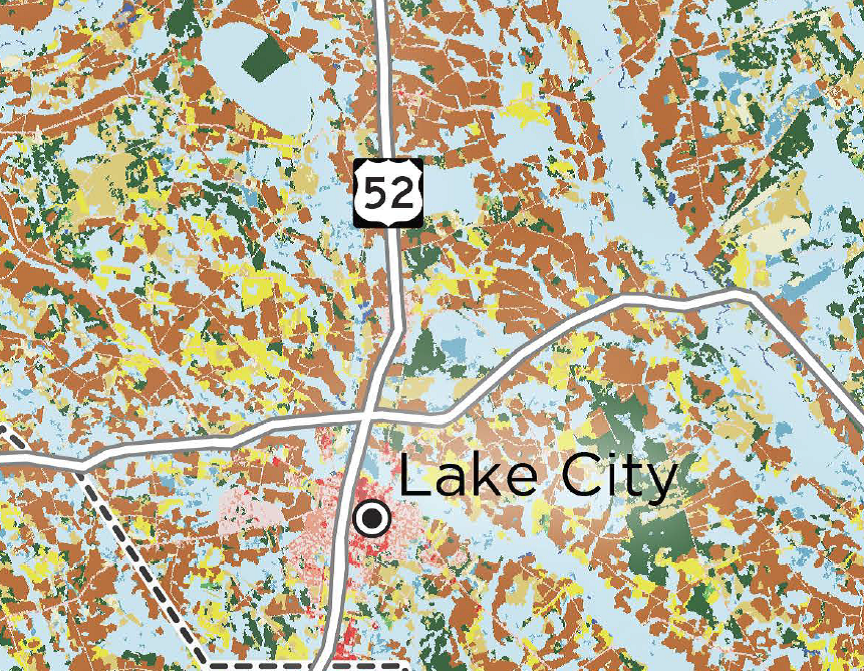 Here are a few of the findings and how they help PDLT to achieve our goals:

The overall patterns are clear: pine plantations in the Sandhills and Winyah Bay area; big farmland on the inner Coastal Plain soils along the I-95 corridor; expanding development in and around the Grand Strand and Florence; large bottomland hardwoods along our rivers.

How does this influence conservation work for PDLT and our partners? For one, it allows us to be strategic in our conservation decisions. We can set priorities for conservation in the coming years based on “strongholds” such as: cypress-tupelo swamps large enough to support a wide range of wildlife species; large blocks of family farms that can remain viable for generations to come; rich duck habitat and wetland ecosystems of our coastal marshes; or well-managed tracts of longleaf pine that can contribute to the recovery of this rich native forest type throughout the Southeast.

The Pee Dee region is home to a variety of park and forest lands preserved for use and enjoyment by the public. If you want to hunt, fish, canoe, or simply admire the beauty of these natural areas, there is a place for you in our nearby parks. The list below is a summary of federal, state, and some local/private park and forest lands listed by county. Get out and enjoy these great resources!

This email address is being protected from spambots. You need JavaScript enabled to view it.

Signup for our E-Newsletter